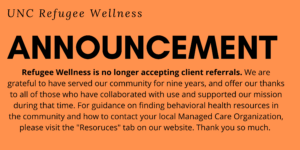 In 2018, approximately 70.8 million people worldwide were forced to leave their homes because of conflict, persecution, and violence. Approximately 25.9 million of these people are refugees.

Who is a Refugee? A refugee is someone who has fled their country and is unable to return due to a well-founded fear of persecution on the basis of race, religion, nationality, political opinion, or membership in a particular social group.

Every fall, the United States president sets a refugee ceiling which determines the maximum number of refugees that may enter the country during that fiscal year.

For 2019, the refugee ceiling was set at 30,000, and refugee admissions reached that cap. Of these 30,000 refugees, 1,300 were resettled in North Carolina, making it the 7th largest resettlement state in the country.

Most refugees experience complex trauma before even facing the challenge of starting over in a new country. Adjusting to a new way of living in a new country adds a plethora of challenges that refugees must navigate post-resettlement. The trauma of displacement in addition to the stress of adjusting to life in America has resulted in refugees experiencing higher rates of mental illness than the general population.

Although refugees must undergo substantial trauma, the resettlement process does not include mental health screenings. In addition to this, refugees who need mental health services encounter barriers to accessing needed help.